Gangster Raju Thehat was shot dead in Sikar, Rajasthan. Four-six miscreants shot Raju Thehat near his house. Raju Thehat was having enmity with Anandpal gang and Bishnoi gang. Rahit Godara of Lawrence Bishnoi has claimed responsibility for the murder. Rohit Godara wrote that he has avenged the murder of Anandpal and Balbir.

On the information of Raju Thehat’s murder, top police officers have reached the spot. Police has barricaded the entire district. There have been reports of three bullet injuries to Raju Thehat. The borders of Haryana and Jhunjhunu have been sealed. It is being said that gangster Raju Thehat was about to leave the world of crime and join politics. 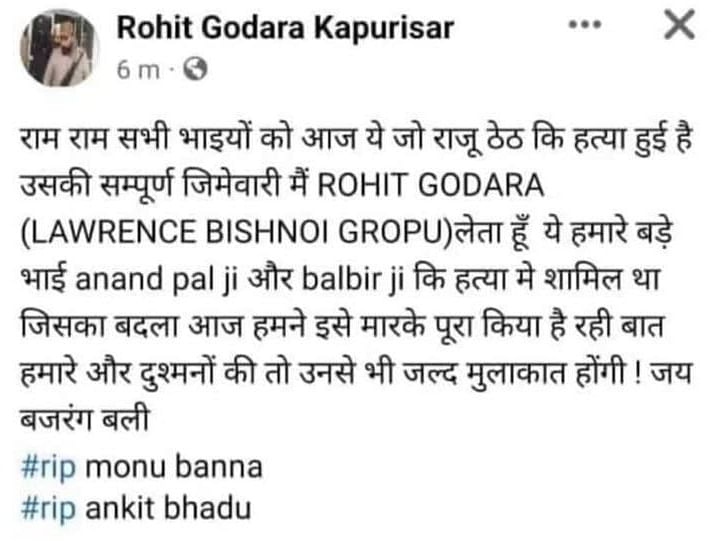 Another injured in firing
Sikar SP Kunwar Rashtradeep said that Raju Thehat was murdered. On the basis of CCTV, the involvement of four youths in the murder case has come to the fore. It is visible in the CCTV that a young man is also talking to Raju. It seems that both had acquaintance. Police has started investigating the matter. A youth has also been injured in the firing. On the other hand, on taking responsibility for the murder of Rohit Godara, the SP said that it is being investigated.

What was shown in cctv
Several CCTV footages of the Raju Thehat murder case have come to the fore. In which it is seen that a tractor stops in front of Thehat’s house. There four-five miscreants are standing outside Raju Thehat’s house. After which the miscreants start firing on target. Then the crook Raju checks Thehat whether he is alive or not.

Announcement of closure of Sikar
Angered by the murder of Raju Thehat, Veer Teja Sena has announced to close Sikar for an indefinite period. Along with this, he has refused to pick up the dead body. On the other hand, the people of Jat community are getting the shops of Sikar closed. They are roaming around the markets asking the shopkeepers to keep their shops closed. Police force was deployed on the spot to stop Veer Teja Sena’s Sikar. Veer Teja Sena workers have gathered outside the mortuary of Kalyan Hospital. Police force has been deployed after seeing the crowd outside the mortuary.

Raju Thehat took entry in the world of crime in 1995
Raju Thehat’s name in the world of crime was already spread by gangster Anandpal Singh. Even after the death of Anandpal Singh, the bullying of Raju Thehat did not subside. Thehat entered the world of crime in 1995. At that time the BJP’s Bhairon Singh government was swinging in the wind and President’s rule was in force in Rajasthan. The SK College of Sikar was the political center of Shekhawati. ABVP dominated the college. Gopal Phogavat was associated with liquor business. Under whose protection Raju Thethath also started doing illegal business of liquor.

Thetet used to do illegal liquor business
While working with Phogavat, Raju Thehat met Balbir Banuda. Banuda used to trade milk but after meeting Raju Thehat, Banuda got addicted to earning a lot of money. He also started doing liquor business along with Raju Thehat. In the year 1998, Balbir Banuda and Raju Thehat together carried out the Bhebharam massacre in Sikar. It was from here that the gang war started in Shekhawati. From 1998 to 2004, Banuda and Raju Thehat started running illegal business of liquor in Shekhawati. If someone involved in this business did not attend them, both would have removed him from the way.

Friendship with Balbir Banuda turned into enmity
In 2004 Vasundhara Raje had the throne of Rajasthan. Lottery of liquor contracts was conducted in Rajasthan. In which Raju Thehat and Balbir Banuda got the liquor shop in Jeen Mata. The shop started and Balbir Banuda’s brother-in-law Vijaypal started living on it as a salesman. In the evening, Vijaypal used to give the account of the consumption of alcohol during the day to both Banuda and Thehat. The kind of savings that Raju wanted from the shop, he was not getting that savings. Thehat felt that instead of selling the shop’s liquor, Vijaypal sells liquor in black. There was an argument between Raju Thehat and Vijaypal about this matter and the argument increased to such an extent that Raju Thehat along with his companions killed Vijaypal.

Congress ruckus in Uttarakhand over Adani case, protest in front of SBI-LIC offices