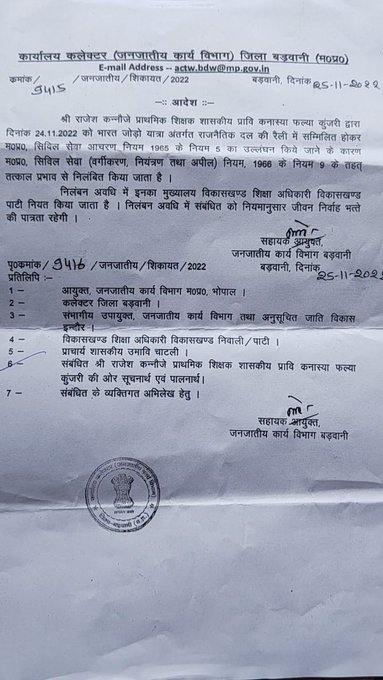 Teacher’s photo with Congress MP Rahul Gandhi is going viral. Rajesh told that Rahul Gandhi hugged him. Asked his name and introduction. He told that he often raises the issues of the society in front of the leaders of the ruling and opposition. He has nothing to do with any party politics.

The department told the violation of these rules

Further, the teacher said in the media that he had gone to join the yatra after applying for leave. At the same time, the department has called it a violation of government rules in the suspension letter. The teacher has been suspended with immediate effect. According to information, Assistant Commissioner, Tribal Affairs Department, Barwani Nilesh Raghuvanshi has suspended Rajesh Kannauje, primary teacher of Government Primary School, Kunjari, with immediate effect. In the order, Rajesh Kannauje’s participation in the political rally Bharat Jodo Yatra along with senior Congress leaders Rahul Gandhi and Priyanka Gandhi Vadra on November 24 has been considered a violation of the Civil Services Conduct Rules.

Abhinav Kumar, Additional Director General of Police and Information Secretary of Uttarakhand, will give a speech at Harvard University, will discuss India’s Vision-2047

From airport contracts to foreign policy… Rahul Gandhi asked these questions to PM Modi on Adani, BJP hit back