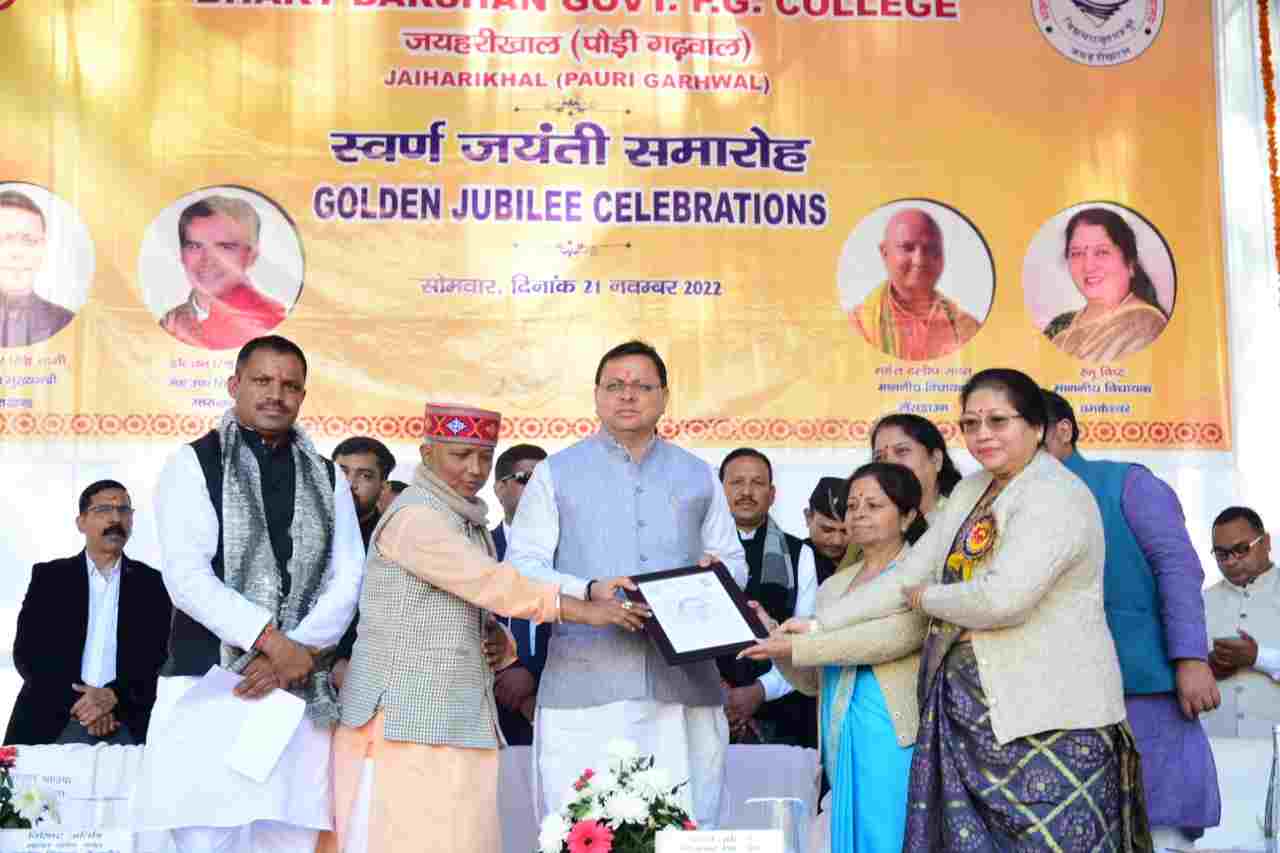 Chief Minister Pushkar Singh Dhami participated as the chief guest in the golden jubilee celebrations of Bhaktadarshan Government Post Graduate College, Jaiharikhal. On this occasion, he paid homage to the great Vibhuti Bhaktadarshan ji. The Chief Minister honored Bhaktadarshan’s daughter Meera Chauhan and also released the souvenir of Bhaktadarshan Postgraduate College. The Chief Minister announced on the occasion that two separate PG blocks would be constructed for MA and MSc in Bhaktadarshan Postgraduate College. M.Sc. in Physics and Mathematics and M.A. In order to open various faculties of Sanskrit, English and Geography, work will be done accordingly after assessing them in a phased manner. College self-employment skill development course will be started. Mini stadium will be built in development block Nainidanda and Jaiharikhal. He directed the District Magistrate to construct the boundary wall of the college student hostel.

The Chief Minister said that approval will be given for the construction of waterfalls at Chinbo in Jaiharikhal development block and Ashobakhali in Nainidanda, Amatola pumping scheme under Jaiharikhal block. A tourist place will be developed at Gudugadi in Nainidanda. Under Nainidanda and Rikhanikhal development blocks, the work of rehabilitation of irrigation canals will be done in Kumaldidanda, Barehi, Pipli, Shillong, Khadrasi, Kartiya, Timaisain, Damalta, Bageda, Rikheda etc. A proposal for the construction of a bridge over the river Ganges at a place called Singtali in Dwarikhal and the construction of a central school in Yamkeshwar assembly constituency will be sent to the Government of India. The Chief Minister said that Bhaktadarshan ji played an important role in Indian independence and in the interest of the state of Uttarakhand. He said that Bhaktadarshan College has done the work of providing skilled human resources. Many people educated from this college are giving their services in the fields of politics, army, police, administration etc.

The Chief Minister said that under the leadership of Prime Minister Narendra Modi, today India’s identity has been made as a capable and powerful India. The state government is also working on the policy of zero pendency. Work is being done on the mantra of simplification, solution, disposal and satisfaction. Continuous efforts are being made to connect the youth with employment and self-employment. Recruitment processes have been expedited. MLA Dilip Singh Rawat, Mrs. Renu Bisht, District Magistrate Dr. Ashish Chauhan, Senior Superintendent of Police Shweta Choubey, Chief Development Officer Apurva Pandey, Block Chief Mahendra Rana, Deepak Bhandari, Prashant Kumar, Municipal President Dugadda Bhavna Chauhan and concerned officers were present on the occasion. Were.

15 year old Muslim girl can marry of her choice, know what the Jharkhand High Court said

Uttarakhand : Congress’s non-military love during the session is just a show off and unnecessary: Mahendra Bhatt